I just finished reading your book They Sing To Our Hearts and I have a question.

You mention several times that animals are able to draw the right family to them. The human and the animal are meant to be together, and there is a higher power that finds a way for that to happen. I do feel that my furry family and I perfect for each other even though we have had several physical and behavioral issues to work through. But it seems through them we’ve grown together in many ways.

If our animals really do find us, do we play a part in this manifestation? If so, how capable are humans in manifesting our own destinies? I so want to understand, can you elaborate more?

I love your question and feel I can best respond to it by sharing with you the story of a delightful rescue dog that recently came into my life. After receiving your e-mail, I set down and reviewed all of the events that led to Bill’s adoption from an animal aid organization in Oklahoma to his new home in California.

There is a doggie daycare center called All God’s Creatures a few miles from my home in Tulsa. Since the daycare opened I kept meaning to stop in and introduce myself but just never took the time. A few weeks ago I received a call from Chris, the center’s owner saying much the same thing. Chris went on to explain that for the past month she was fostering a Puggle named Bill for the Animal Aid of Tulsa. She was very fond of this cute little dog but he never quit barking and it was driving every one crazy. As well he had been sick with kennel cough twice and the people at animal aid were concerned that he might have to be put down.Chris knew she had to do something to save Bill so she thought of me, and made the call. I told her I would be glad to help and would donate my services because Bill was a rescue.

I met Bill at Chris’s home; he had been taken there because of his cough. When I arrived the Puggle quietly came in the room, greeted me and went on to check out Chris’s cats. I noted that he was nice to them only curious. Chris mentioned he also got along well with the other dogs at the center and so wanted to find a way to get him happy and healthy enough for adoption. Bill took my heart right away as well, with his friendly energetic personality. I felt only sweetness from him and ask him why he barked. He told me he didn’t like the center as there wasn’t anyone to hold him; he didn’t belong there and wanted to go home. When I asked about his family, all he said was he missed his little boy. Chris confirmed he was very good with children. I then explained to Bill we could not find his previous home but would help him find a new one. Before we could do this though, we had to get him healthy. I then recommended some homeopathic remedies to Chris for his kennel cough.

When I got home I thought of my clients in Southern California, Todd and Dana with their own beloved Puggle, Ray. I realized Bill and Ray are about the same age and look almost identical. For some reason I kept thinking Bill would make a nice addition to their family. This thought kept niggling at me so a few days later I called Todd to share Bill’s story with him. Afterwards Todd explained that recently Ray had become closer to Dana and he was feeling a little furry cuddle deprived. He went on to say he had been thinking about getting another dog to be a friend to Ray and fill that cuddle spot for him. So Todd spoke to Dana and they both agreed that Bill was the perfect solution for them.

When I stopped by the daycare center to tell Chris that my clients had decided to adopt Bill, I was thrilled to discover that his kennel cough was completely gone and he no longer was barking incessantly. Chris said it was like he got to talk to someone and that made him happy. So with one obstacle down I now wondered about getting him transported half way across the country. The next Saturday I was scheduled to do animal communication sessions at pet boutique in Oklahoma City. One of the clients that came to see me is involved in Collie rescue. I told her about Bill and his need to get to California. She knew of several organizations that will help transport animals to their new homes and offered to contact them for me. When I got home that evening I was amazed to see an email message from one organization indicating there was a volunteer transport leaving the following weekend for Riverside California, an hour and a half from Bill’s new family! I sat there marveling at the synchronicity of events starting with Bill becoming separated from his family, his going to the house of an employee of the doggie daycare center which lead him to Chris. Then his non-stop barking and kennel cough brought me into his life and through that encounter he found his new home. 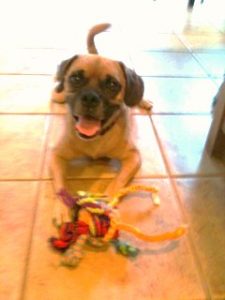 Now how much of these events are due to Bill wanting to be held and Todd’s desire to find a friend for his dog and someone to cuddle? No one can know for certain but I do know animals do not have the kind of logic that allows them to make decisions from doubt or fear. They don’t fear the future or regret the past. They follow their instinct and hearts in everything they do. We all are divinely guided but in order to fully access this help we need to let go of our logical minds and follow our hearts, like Bill. Who knows what wonderful things are in store for us when we have faith in Spirit to guide us?

When I reflect on my experiences, I realize that my life has come full circle. I am truly on my soul’s journey to help humans and animals make a spiritual connection, and feel balanced and whole through my work as an animal communicator and Shamanic healer. My love and connection to the animal kingdom, which started when I was three years old, led me to horse training and showing, then competing with herding dogs. All of my life animals have been an important part of who I am and taught me many of my life’s lessons.

You can find out more about which cookies we are using or switch them off in settings.

This website uses cookies so that we can provide you with the best user experience possible. Cookie information is stored in your browser and performs functions such as recognising you when you return to our website and helping our team to understand which sections of the website you find most interesting and useful.

You can view all of LindaPestana.com's Policies by clicking each link below

Strictly Necessary Cookie should be enabled at all times so that we can save your preferences for cookie settings.

If you disable this cookie, we will not be able to save your preferences. This means that every time you visit this website you will need to enable or disable cookies again.