A Not So Subtle Introduction to Self-Awareness

Philosophers have sought to understand our innate nature from the time of Plato and before. These inner tendencies can be our guides if we learn to listen.

Driving each of our personalities, our desires, our places of comfort are original innate patterns of behavior. Identifying these subconscious patterns or templates helps us navigate our own circumstances and be more understanding of others.

From the earliest times, philosophers have used the idea of universal personality forms—sometimes referred to as archetypes—to describe and understand how humans interact with the world and with each other. Plato introduced the idea that when a person did not engage properly with one’s original forms, mistakes were inevitable.

The Western Mystery Tradition, Qabalah, identified these forms in levels of the Tree of Life known as archetypes. These archetypes became the twenty-two major arcana of the Tarot.

Later, Swiss psychologist Carl Jung described the universal archetypes in human personality present in all of us. His teachings form the basis for many current modes of psychological healing and recovery. 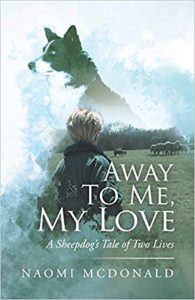 Archetypes have much to teach us about our true selves. When we resonate or are in harmony with these innate patterns of behavior, the result can be a fulfilling, purposeful life. When we ignore or misunderstand our archetypes, imbalances can manifest in our health, finances, relationships, or professions.

If you’re confused about archetypes, you’re not alone. My new autobiographical book, Away to Me, My Love: A Sheepdog’s Tale of Two Lives, describes how my entering the fascinating world of shepherding with my dog, Luke, became the gateway to discovering and embracing my own archetypes.

The following excerpt from my book describes my first experience with the idea. After months of frustration working with my seemingly untrainable Border Collie, Luke, I had arrived at my first sheepherding event drowning in self-doubt. In the scene, a new friend at the clinic, Chris, helps me deal with my overwhelming feelings of confusion and inadequacy. Instead of engaging with my obvious emotional state, he explains what archetypes are and how they apply to my situation.

I felt tears rising but blinked them back. I would not cry. I would not. “I don’t know what the heck I’m doing here. Right now, I’m so out of my element and confused, I don’t know which way is up. I couldn’t make a competent decision about which socks to wear if I had to”

Chris doesn’t engage with my obvious emotional state. Instead, he refers to my profession as a horse trainer and uses archetypes to show me how to look at my situation through a different perspective.

“Horses can be around eleven hundred pounds, so you are handling huge animals every day. Your rig is the size of many commercial carriers. You have a western profession mostly occupied by men. Yet”—Chris held up a finger—“your dogs were bathed before you came, and both had matching collars and leashes. I would say you’re suffering from Queen/Cowboy/Artist-archetype syndrome.” He leaned back, crossed his muscled arms behind his head, and took on a self-satisfied look that said, “I hit the nail on the head.”

“An arka-what syndrome? What are you talking about?”

“I was a psych major in college. In fact, that’s where I met my wife—we were both practicing psychologists for several years. I inherited this place and the one in Kansas, so now I’m a rancher. My wife still practices, though. One of my heroes is Carl Jung. His theories of archetypes helped me understand my patients on so many levels.”

“But you didn’t tell me what an arka-whatever is.”

“An archetype is an unconscious inherited pattern of thought.”

“How does that relate to queens and cowboys?”

“There are primary archetypes—king, queen, princess, prostitute, child, victim, nurturer, rescuer, hero, teacher. The list goes on. You’re a queen and a shepherd combined. There must be a dose of teacher in your psyche too. These subconscious patterns can influence every decision we make.” Chris’s eyes crinkled at the corners when he smiled.

“Archetypes can also influence how we react to situations. The Queen/Shepherd in you feeds on authority and leadership—your kingdom must be protected, directed, and nurtured. The artist wants it all beautiful. The horses are your throne, and the cowboy wears spurs. Here”—he waved his hands out wide to encompass the dog clinic—“you’re unsure of yourself and your abilities. I would say you haven’t felt that way in a long, long time.

This not so subtle introduction to archetypes pulled me from a self-sabotaging state of emotion (that Plato would call not engaging properly) to a place of self-awareness. It wasn’t the lack of ability or preparedness that caused my alarm it was being out of balance with my natural state. Knowing that I was responding to the unmet inner need of Queen allowed me to relax and think through the situation objectively.

For those who may not have a retired psychologist to introduce the concept, we can identify our personal innate patterns by reading a Tarot spread, taking an archetype course, or joining a like-minded group. The wholeness, empowerment, and freedom that result when one delves deeply into our subconscious patterns is like emerging from a long dark tunnel into daylight. We have a view of life we’ve never seen before.

When I reflect on my experiences, I realize that my life has come full circle. I am truly on my soul’s journey to help humans and animals make a spiritual connection, and feel balanced and whole through my work as an animal communicator and Shamanic healer. My love and connection to the animal kingdom, which started when I was three years old, led me to horse training and showing, then competing with herding dogs. All of my life animals have been an important part of who I am and taught me many of my life’s lessons.

You can find out more about which cookies we are using or switch them off in settings.

This website uses cookies so that we can provide you with the best user experience possible. Cookie information is stored in your browser and performs functions such as recognising you when you return to our website and helping our team to understand which sections of the website you find most interesting and useful.

You can view all of LindaPestana.com's Policies by clicking each link below

Strictly Necessary Cookie should be enabled at all times so that we can save your preferences for cookie settings.

If you disable this cookie, we will not be able to save your preferences. This means that every time you visit this website you will need to enable or disable cookies again.